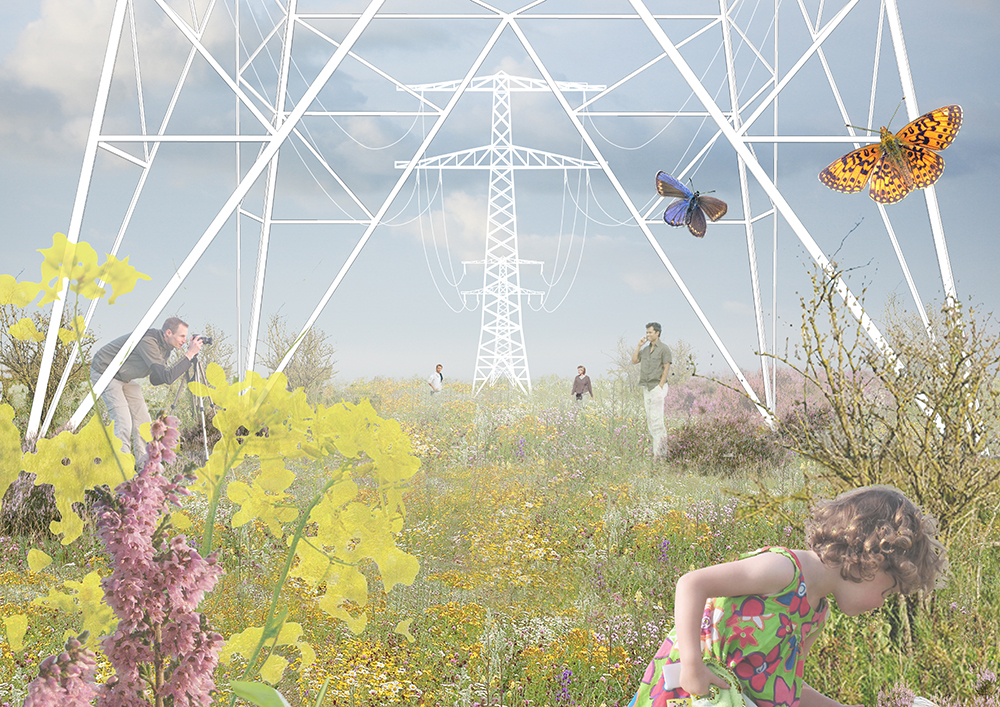 ‘Green and blue biotopes’ is an urban strategy concerning Rotterdam Metabolism. Analyzing the flows, it was pointed out that by using the formative power of geological processes at strategic points; opportunities for the development of new ecological environments arise. As a consequence, we indicate several ways to take advantages from the existing situation to make the city more resilient.

Rotterdam is situated in the Rhine-Meuse delta and has the only open water connection to the sea. Besides safety the dynamic of sea and river lead to two other processes that pose a threat to the status quo. The first is silting, the second is salinization. The deepening of the port increases the inflow of salt water during dry periods. And freshwater is quite simply essential for agriculture. The city is also a bottle neck for the migration of species, lacking stepping stones for fishes in the busiest and most urbanized part of the Meuse.

Ecological energy network: Rotterdam lies at a strategic junction between river and coast landscapes. Currently, there are few green and blue structures that are fully connected to each other, meaning that 71 of the 100 monitored dune landscape species and 18 of the 28 monitored species in the peatland pasture are in decline. The reservations in terms of space made by businesses for safety reasons or with a view to possible expansion in the future mean that a lot of the empty space in the port cannot be used. This also applies to the 160-metrewide
zones running under the high-voltage lines. This remaining space can
function as a corridor for biota through designing these zones to be ecological connecting zones, or an Ecological Energy Network running through agricultural and urban landscapes.

Water landscapes: the current creed adhered to for water in the city (infiltrate – store – drain away), which focuses on surpluses, is tackled in design projects. Instead of throwing water away when it is in abundance, the water is saved up outside of the city ready for dry periods. By storing rainwater at sites around Rotterdam by using water squares and existing waterways, water can be brought back again during dry periods and urban green areas can be given freshwater so that irreversible salinization can be prevented. The new storage areas then also take on a recreational or ecological value. The wet environments that are created form the solution for the lack of natural water meadows around Rotterdam. A productive landscape can also be created from these, and they can also be used for recreational purposes.

Sedimentation is still seen as being waste that gets in the way of port activities. It is for
this reason that more than 20 million cubic meters of sediment are dredged from the port every year, meaning daily transportation of dredging from the port to the sea. Transportation accounts for every 9 out of the 10 euros it costs to dredge one cubic meter. Local use of silt from the port could mean savings of € 7 per cubic meter.

Self-growing Maasvlakte: Through targeted initiatives, sediment flows at sea can be used for creating safety and space for food production and, in the longer term, new port activities. Behind a new dyke, a combined process of natural land reclamation and oyster farming is taking place. The result in 30 years’ time will be a new Maasvlakte (port area) that has grown naturally.

Sedimentation banks and land farming: At strategic sites, port silt can also be used locally in order to ‘soften’ the steep banks of existing dykes. Areas can be set up for land farming immediately behind the dyke. While the dredging steadily develops to become useable agricultural land in this way, during the process a dynamic natural environment can come into being.
Docks: If we allow unused docks to silt up in strategic places instead of continually removing silt, new biotopes are created, forming the important links for migrating fish and locally improve the water quality. Allowing docks to silt up is not only good for nature: it also brings opportunities for using the docks as ecological park landscapes with recreational value.

In order to tackle the problem of salinization, we need to let go of the current creed
adhered to for water management (infiltrate – store – drain away). Instead of draining excess water off to the river or the sea as quickly as possible, we can also store it outside of the city so that the urban green areas can be supplied with freshwater from this buffer and salinization can be prevented. By collecting 1% of all rainfall in a seasonal store, the equivalent of approximately 16 hours of rain can be stored for use during dry summers. In addition to being functional, the new storage areas are also of recreational and ecological value. 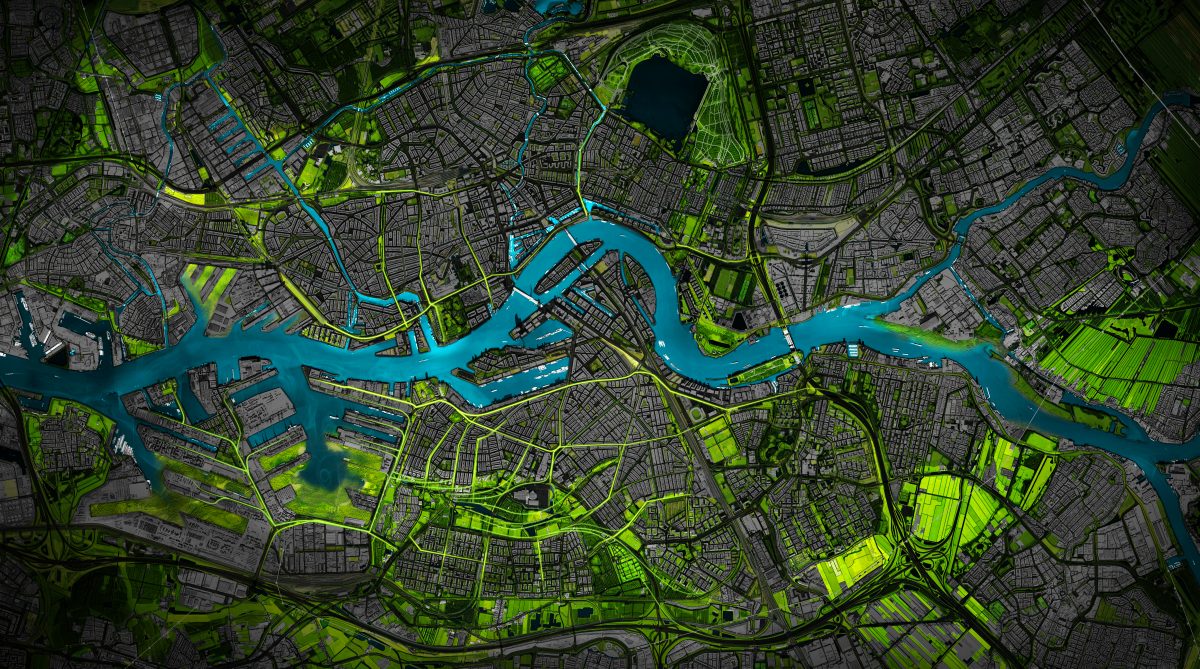 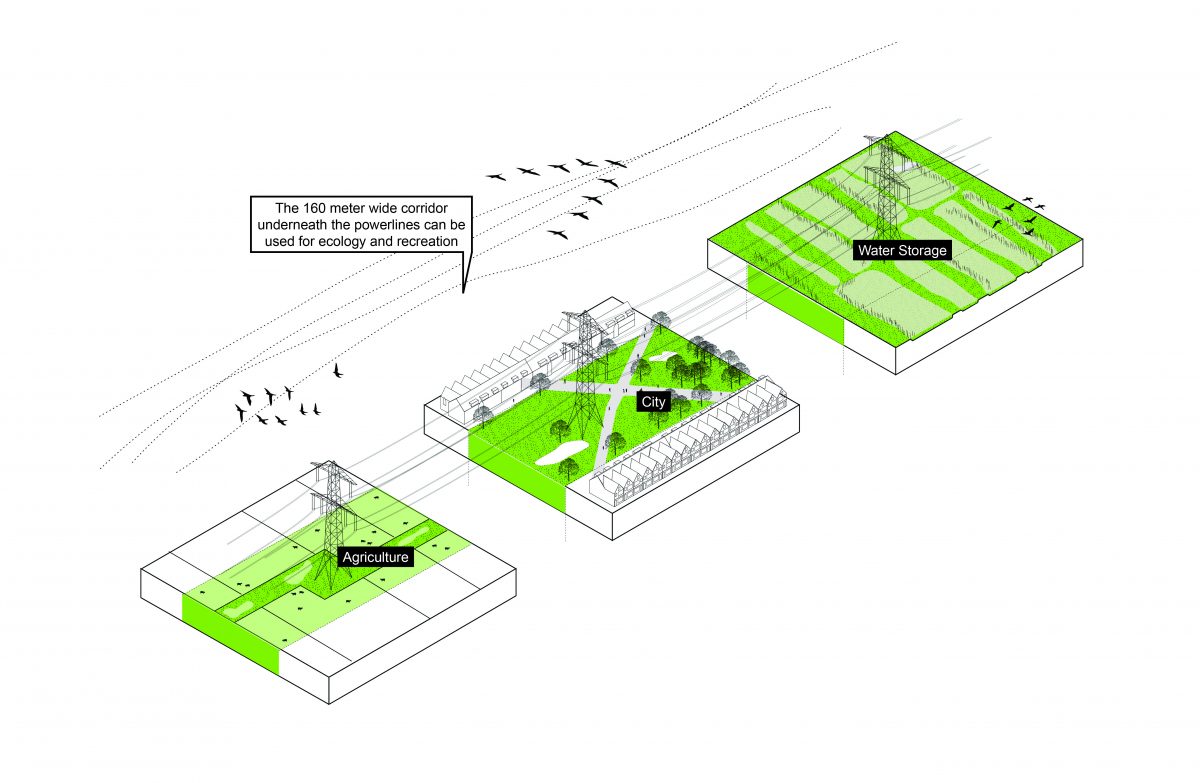 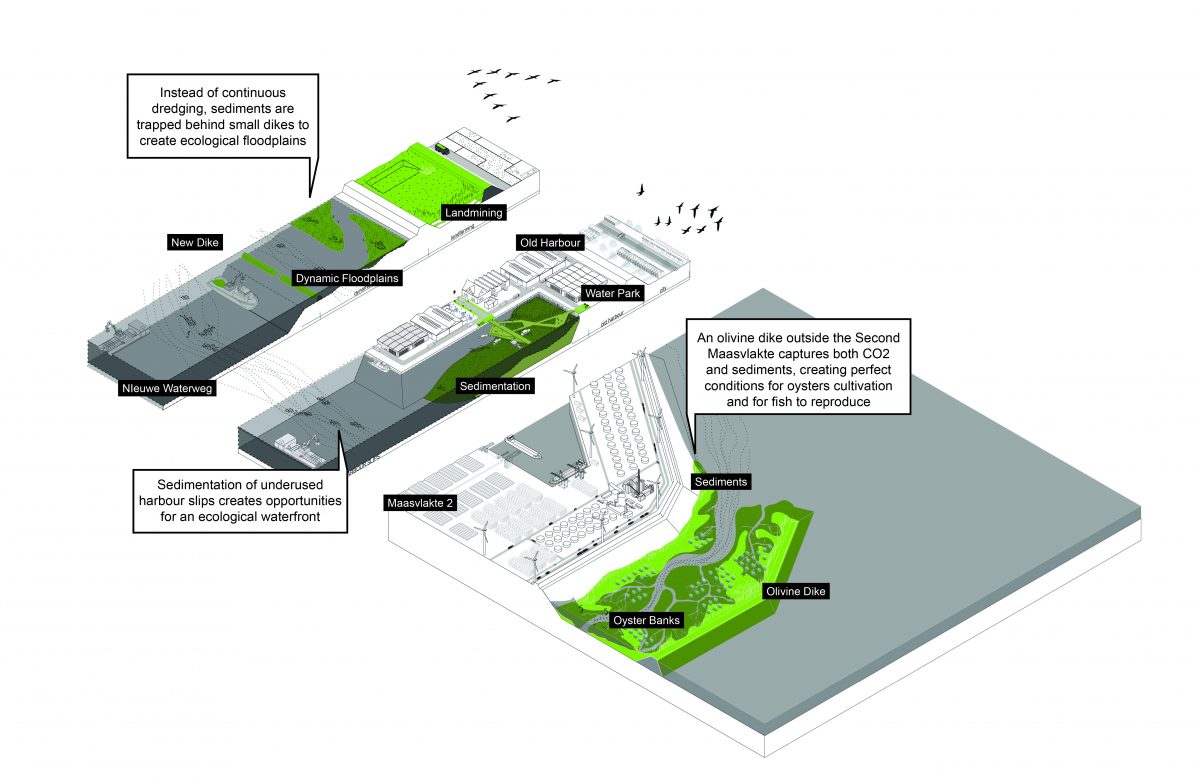 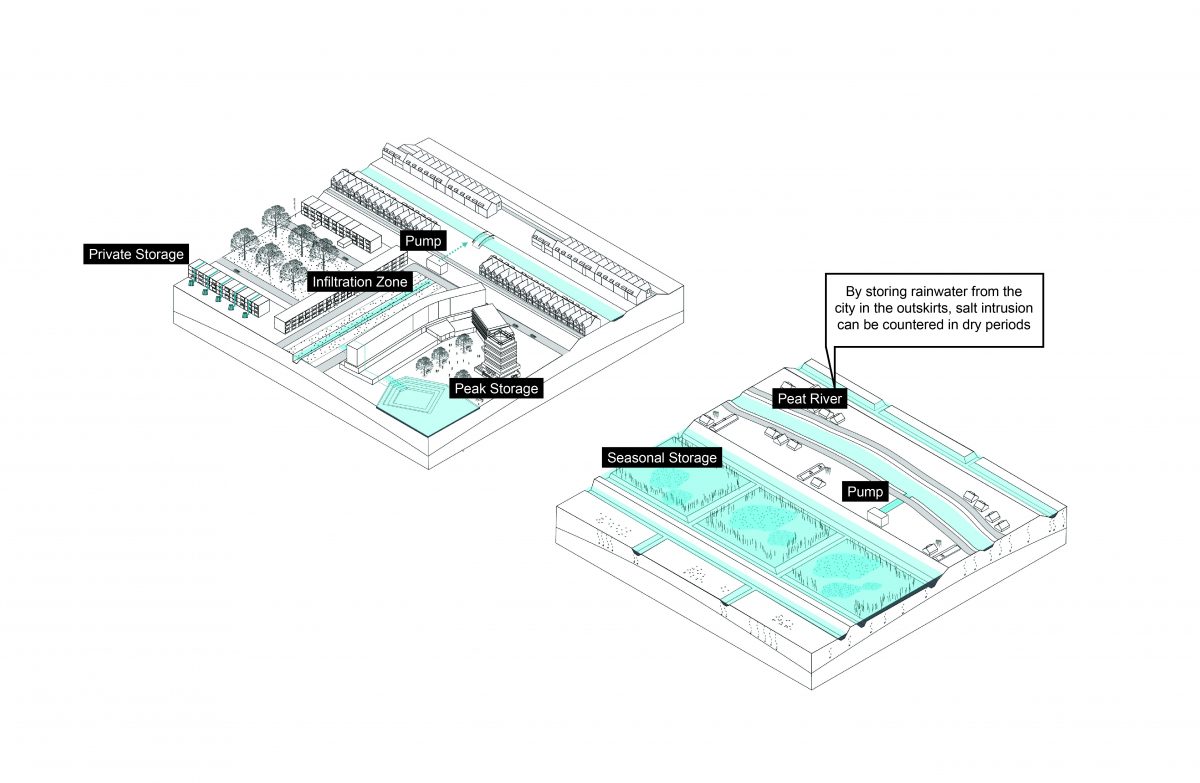